Blur and DropShadow effects offer easy way to enhance your application’s visual appeal. But they come with a big price tag, and if used incorrectly, could destroy user experience instead of improving it. In order to make the best use of these effects in Silverlight, it is important to understand how they work behind the curtain.

When Silverlight runtime renders an element with an effect (whether built-in or custom pixel shader), it first renders that element and all of its children into an off-screen bitmap. Then, using that bitmap as the input for the pixel shader effect, the output of the pixel shader is finally rendered to the screen.

What’s interesting about the Blur effect is that unlike custom effects that can only have one pass, it executes in two passes. The first pass blurs the image horizontally, while second pass finishes with a vertical blur. This is called separable blur, and it saves a significant amount of computation in exchange for using extra memory and fill rate. 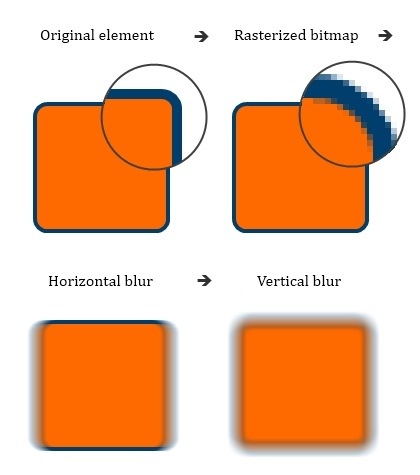 The cost of separable blur with radius N (N tap filter) can be estimated as: 2 writes + 2 * N reads + 2 * N multiplies + 2 * (N – 1) additions per pixel. So, applying 9 tap blur effect to a 400 x 400 pixel element will take 3,200,000 memory operations and 4,800,000 arithmetic operations. Now you can see how applying the blur effect to a large element can choke even a high-end CPU. And yes, Silverlight 4 executes all effects, including blur and drop shadow, on the CPU. The Windows Phone 7 version of Silverlight is an exception, because it doesn’t support custom pixel shaders, and executes Blur and Drop Shadow effects on the phone’s GPU.

The DropShadow effect is a little more complicated then the Blur effect. It starts in the same way as any other effect by rendering the element into a memory bitmap. Then an alpha mask is separated from the bitmap and blurred using the exact same two-pass method I described for blur. Finally, the bitmap and the blurred alpha mask combined to create an element with drop shadow. 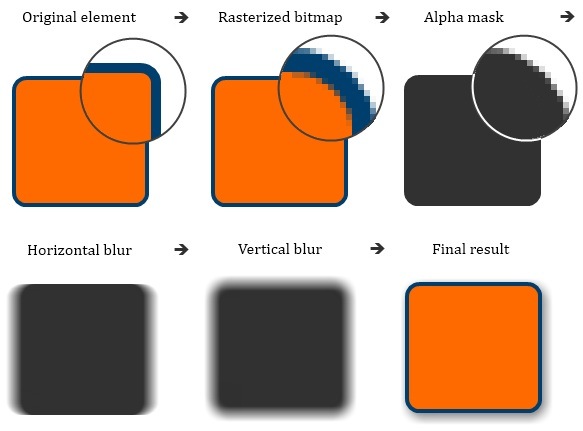 Because DropShadow uses a blur filter, it will suffer the same performance problems as the Blur effect. Furthermore, DropShadow uses even more memory and more fill rate, making it very taxing on both the CPU and memory bandwidth. It is important to understand that the cost of applying the DropShadow effect depends entirely on the size of the element, regardless of how much or how little of the actual shadow can be seen.

As I mentioned before, applying an effect to an element with children will cause the complete visual sub-tree to be rendered into the bitmap and processed by pixel shader. This has an important implication – the easiest way to drive CPU utilization to 100% is to add a drop shadow to the large form with one tiny animated control.

This last bit of information about effects is not performance related, but still important to know. Applying an effect to a text element or its parent forces Silverlight to use its standard anti-aliased text rendering instead of ClearType. This is the second reason why you should not add effects to the top level controls.

Things you can do to improve performance

The recommendations I provide below hold true for all effects, but they are especially important for computationaly expensive effects such as DropShadow.